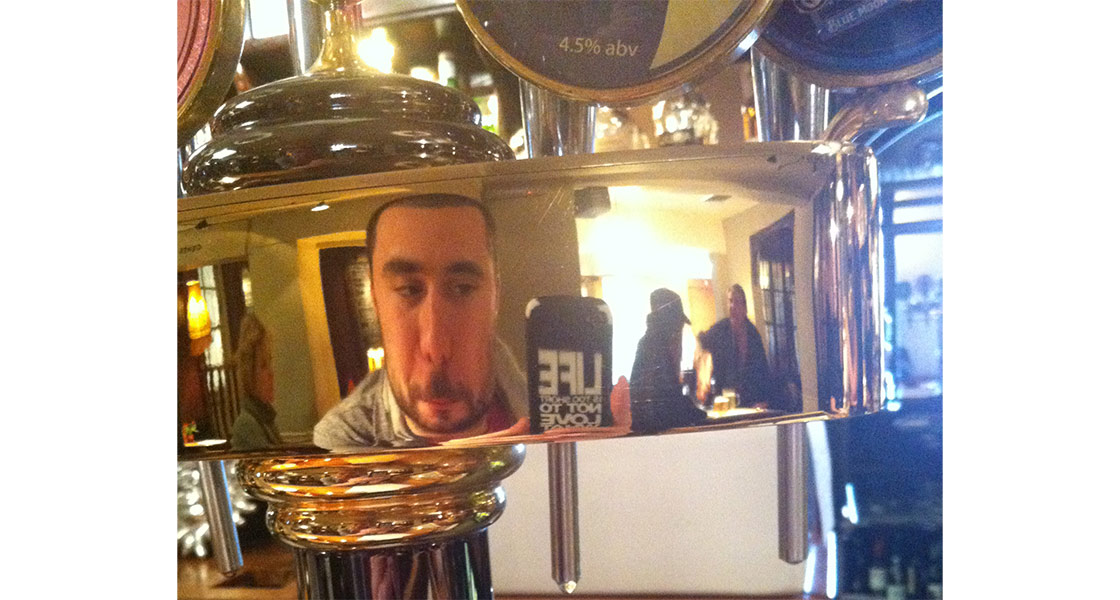 Lateness is never a good look for an interviewer, and after a 10 minute sprint my attempt to stroll the last few yards casually surely wouldn’t fool anybody. Fortunately, Barnet-born singer-songwriter Jake Morley arrives at exactly the same time, and we bond over the inherent awkwardness of interviewing yourself. I’m shorter than I expected, with an almost imperceptible nervousness. “Relax,” he says seeing the same in me. “We do this every day”.

Self-reflection and internal narratives are major themes running through much of the bolder and more mature material that is set to follow 2012’s cult classic Many Fish To Fry. The joyful debut is clutched close to the chests of many as a result of extensive headline touring round the world, numerous festival and support slots, and enthusiastic support from Radio 2, 6Music, local radio and the press.

“I’ve actually only toured the UK, Ireland, one coast of Canada and a tiny corner of Europe,” he explains, “so I’d rather you didn’t say the world. And cult classic? Is that PR-speak for “not a big seller”? Why do you always have to hype everything up?”

His modesty belies a deeper talent borne out of thousands of hours of stage time winning over one audience at a time, and a ruthless dedication to his art. His deeply personal songs, captivating live presence and ground-breaking guitar style taking him from archetypal acoustic troubadour to sell out headliner at HMV’s Next Big Thing Festival, via legions of dedicated fans.

Morley cut his teeth in a bustling London singer-songwriter scene where Lucy Rose would book him and Ed Sheeran to play tiny pub rooms. Rising stars Rae Morris and Jack Garratt are contemporaries. Does commercial success, or lack of it, weigh on him at all? “My first album was clearly too original, too quirky, too damn radical for the mainstream market” he laughs.

Perhaps it’s more likely that it just wasn’t good enough. As The Guardian once said, “He is doing well: radio loves him… not that we’re fans, you understand… As records of fauxhemian guitar-plucking and husky vocals go, it’s just like all the other ones.”

Morley is quick to respond. “You’re probably right I’m not good enough, and to be honest my fans aren’t even that legion. But when we’re crammed into tiny venues and sharing big moments together I’m not wishing for more, I’m truly grateful. And I love it when my friends succeed. Sometimes you talk so much crap I wonder what you really add to my life.” Blah failure blah I was just thinking the same thing.

“I’ve never thought about anything as hard as these new songs before. Every detail of every single one means something to me, sometimes many things, and nothing is an accident. It was a crucifying method of writing that sometimes drove me close to the edge.”

The results are startling. First new single Falter is a controlled explosion of voices, strings, rhythms and a new guitar technique where each finger plays each string in turn. It’s hypnotic and beautiful, “The sound,” Morley says, “of everything suddenly crashing to a halt in slow motion”.

As we talk further he gets more and more animated. Finally I have to bring up Watch Yourself, a song where he duets with his unconscious mind, and we arrive at the moment I’ve been dreading. The moment where the elephant in the room goes from politely tugging on elbows to slamming drinks to the floor. Isn’t it a little worrying to be conversing with yourself like this?

“Absolutely. And all the more important because it’s the mechanism for our suffering, and if we learn to understand it the prize is happiness and self-discovery.

“Music needs to offer more than just posing about looking cool, feeding an ego that’s hungry for attention. It’s not a game – this is fucking serious. This is an emergency, we have to find meaning in our lives and the clock is ticking.

“The answers are not going to land in our inbox. We have to hunt them down like our lives depend on it, because they do. Artists in particular have an obligation to be fearless as well as just doing strummy strummy nice voice and collecting the applause.

Most importantly, we all have to disrupt the narrators holding us back, feeding us junk, in turn flattering and punishing us, listing our achievements while sniping and taking us down, distracting us, and wasting our time. We could find joy in the present if we could only let ourselves.