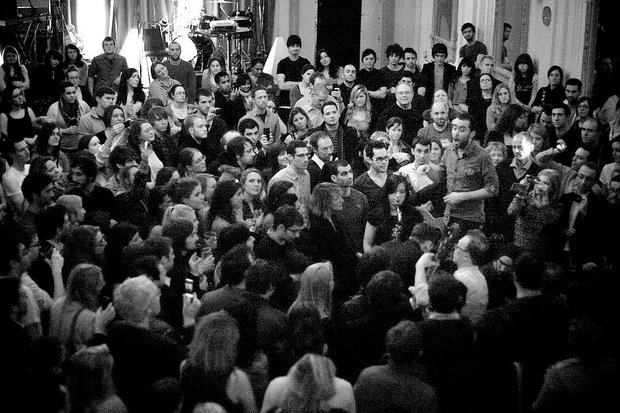 A rather belated but no less emphatic thank you to everyone who helped make the Bush Hall album launch the most incredible night of sell-out wonder I’ve ever been part of.

Everyone from all the fans who piled in, sat down, stood up, hung from the chandeliers, to the band and an enormous army of helpers – made the night the most incredible gig I’ve ever done. There’s nothing I would have changed, which is saying something from me as I come away from the good gigs wondering how it could have been better.

I can admit now to some hesitancy choosing Bush Hall for the launch – a number of people questioned whether it was too big for a start. So to walk out on stage and see it packed out in ever corner with so many unfamiliar as well as familiar faces was truly special. What a reception!

I’m not being modest when I say that crowds make those gigs what they are. We performed really well it’s true, but without the atmosphere of hundreds of people being silent and then roaring us on after each song, it would have been nothing. So thank you again.

Highlights include the acoustic version of inside my mind from the audience around a piano, the dancing, one of my friends fainting, several people crying, Daisy Coole’s cupcakes, Kevin Pollard‘s badges and visual backdrops, fans travelling from all over the land, and the amazing support sets from Charlie Barnes and Tom McQ and the DeeTees.

You may have heard from Facebook that my evening then took a rather a strange turn as I was walking to the night bus stop in Shepherd’s Bush Green later that night. I saw a man hanging by his fingernails from the window of a third storey building, and watched utterly powerlessly as he fell from this great height only a few metres away from me. The sight and sound of his landing is an experience I don’t think I will forget in a hurry, and a call I made to paramedics wasn’t helped by the guy’s boyfriend screaming uncontrollably in my face in understandable panic.

He never stopped breathing as he lay there, and so when the paramedic took over I could feel safe in the knowledge that everything that could have been done was done. But I never quite managed to contact the hospital or police days later to find out if he lived or not. Perhaps I was scared to find out the answer as he was apparently in a critical condition as I left the police station. I sincerely hope that doctors and surgeons were able to save his life, even if it meant his life was changed for ever.

I found it hard in the aftermath to look back at the gig, as I kept drifting back to the mental image of the man’s fall. But after a few days I was able to remember that as well as being quite a traumatic night, it was also the night of the best gig of my life. I felt proud of my amazing band who performed like such masters, the managers, producers and enormous team who work so hard on this. I even allowed myself a smidgen of self-pride – a very rare event I can tell you.

It was truly a night of highs and lows, rises and falls. I hope there will be more nights as high as that one – even if they come rarely they make all the unavoidable lows and grinding middles worthwhile.